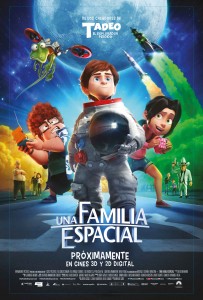 The Goldwing family is ready for its premiere in Mexico next saturday march 19th;the film promises quality animation and fun for children and grown-ups, a perfect way to go to the movies.

‘Una Familia Espacial’, known in english as ‘Capture the Flag’ counts with our production stamp and has travel around UK, Israel and Argentina thanks to Paramount Pictures international bet, which includes a 24 countries tour in its distribution plan.