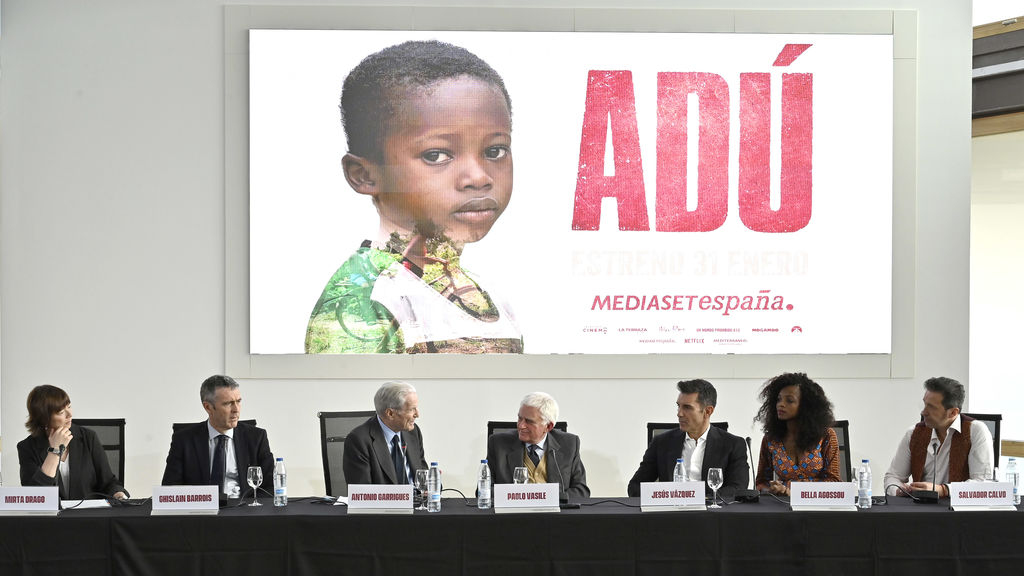 The next January 31 will arrive at the ADÚ rooms, one of the most special films produced by Telecinco Cinema and before which Mediaset Spain has developed a social and solidarity campaign participated in by its programs and news that will invite viewers to reflect on the different angles of the migratory phenomenon and the reality of the African continent that shows the film directed by Salvador Calvo.

In a colloquium participated by Paolo Vasile, CEO of the company, and Antonio Garrigues Walker, Honorary President of the Board of Directors of the Spanish Committee of UNHCR, together with Salvador Calvo, Jesús Vázquez, UNHCR Goodwill Ambassador, Ghislain Barrois, CEO of Telecinco Cinema, and the actress of the film Bella Agossou, Mediaset Spain has announced, on the one hand, the donation to the NGO Project Ditunga with Yelmo Cines of a part of the box office of ADÚ during its exhibition in theaters and, on the other , a battery of content and actions on the antenna to transfer the debate to society.

The NGO Proyect Ditunga, which has been operating for thirteen years in the south of the Democratic Republic of the Congo in the construction of schools, libraries and hospitals, will donate to the project of a new hospital in the area. For this purpose, Mediaset España and the exhibiting company will donate € 1 of each ticket sold in the online stands of Yelmo Cines during the entire operating window in the movie theaters.

Created in 2006 by the priest Apollinaire Cibaka Cikongo, Project Ditunga has among its main objectives to promote the self-supply of food in the population through the promotion of associative life, agriculture, livestock and environmental protection; the improvement of the conditions of nutrition, hygiene and health, child schooling and continuous literacy for adults, the social, cultural and economic promotion of women, the defense of human rights and democracy, the reception of orphans and the environmental Protection.

Among the achievements are the construction of 67 schools, an interscholastic library and a higher educational institute; 62 agricultural cooperatives, capable of supplying 2,500 families; from a school farm; 11 training centers for women; and a fish farm, in addition to the excavation of 122 drinking water wells.

‘Adú’, the migration drama inspired by millions of true stories

‘Adú’, shot for seven weeks between different Spanish locations and the Republic of Benin, tells the drama about migration inspired by millions of real stories from a story with three intertwined stories: the desperate attempt to reach Europe of a six year old boy and his older sister; the struggle of an environmental activist against poaching and the problems of his newly arrived daughter from Spain; and the work of a group of civil guards to face a new attempt to jump the fence of Melilla.