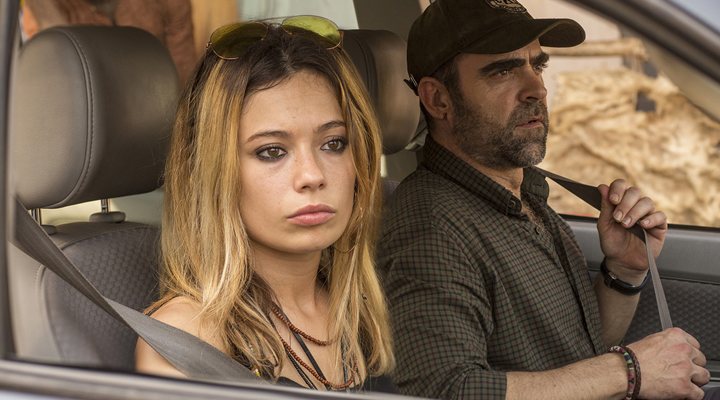 The film follows the story of a boy named Adú (Moustapha Oumarou) who, one day, after a series of incidents, has to leave his home with his sister Alika (Zayiddiya Dissou). The plot takes us through the journey of incidents and tragedies that they experience during their escape and their possible reunion with their father, who is in Spain. On the other hand, we have two stories related to the main theme. On the one hand, we find Gonzalo (Luis Tosar), an environmental activist who fights against poaching and faces the problems of his daughter Sandra (Anna Castillo), who arrives in Cameroon after years without seeing each other. On the other, we have Mateo (Álvaro Cervantes), a civil guard stationed at the Melilla fence where hundreds of people jump every night. Due to the few troops found to control the situation, it ends with the death of one of the immigrants and the judicial investigation of the incident. Regret in conscience, wanting to do things well and not being able to external factors or the preservation of innocence above all are some of the issues discussed in ‘Adú’.

The new film of Telecinco Cinema is one of the projects with “greater passion and personal involvement on the part of a team” that the company has never had and which translates into a “film that is outside the usual schemes of a commercial television that Produces cinema ”, according to Vasile, CEO of Mediaset Spain. He himself has stated that this presentation has been “the most difficult” of his professional life due to, as stated by Jesús Vázquez, UNHCR Goodwill Ambassador, how “special and personal” it is for him.

The story that moved Vasile

‘Adú’ has been gesturing for at least five years, when news broke in the news that Adou, an 8-year-old boy, had been discovered inside a suitcase thanks to a scanner at the customs of Tarajal, Ceuta. In the producer they tried to make a project for television telling this harsh reality, but they did not find the key. Several versions of the script later and thanks to the participation of Calvo, the director of the film, gave with it to report “an extremely dramatic subject, but without doing pornography of the pain to turn it into an element of success”.

Calvo, on the other hand, was also impacted by a couple of testimonies told by his partner, who worked in a series for the Spanish Commission for Refugee Assistance (CEAR) in Gran Canaria: that of a 6-year-old boy who arrived with his two sisters and his alleged mother, which turned out to be an emissary to be “scrapped” in Spain by selling his organs, and that of a teenager who fled Somalia after his father, a warlord, and his friends raped him repeatedly.

These two stories that make up the main plot are contrasted with those of Westerners. Both stories serve to make the viewer realize that these problems become trivial when immigrants struggle to survive and have a better future. “Unfortunately, most of them are not looking for that, but fleeing from death,” says Vázquez as the only criticism he would make of the film and which refers to the last sentence with which it closes.

The reason for carrying out “Adú” is very simple for Vasile: “We have realized that the smoke generated by politics has hidden the flame of a human tragedy made of millions of tragedies.” Although it may seem that this film aims to provide a solution to a global problem, Vasile dismisses it: “It does not give any solution, does not take any game or say who the good and the bad are, because we are not who to do it.” ‘Adú’ also does not point anyone in the political arena on whom it is addressed: “It has no message for anyone. It has a message for everyone. ”

However, Agossou, a fundamental part of ‘Adú’ being the coach of the youngest actors in the film, believes that it does offer a solution: “Show this reality so that people know that there are people who go through so many misfortunes to cross a border. ” The actress thinks that the limits should not exist as they are all the same: “I will be black, but my blood is as red as yours, my saliva is white and my shadow is the same color under the sun as yours” .