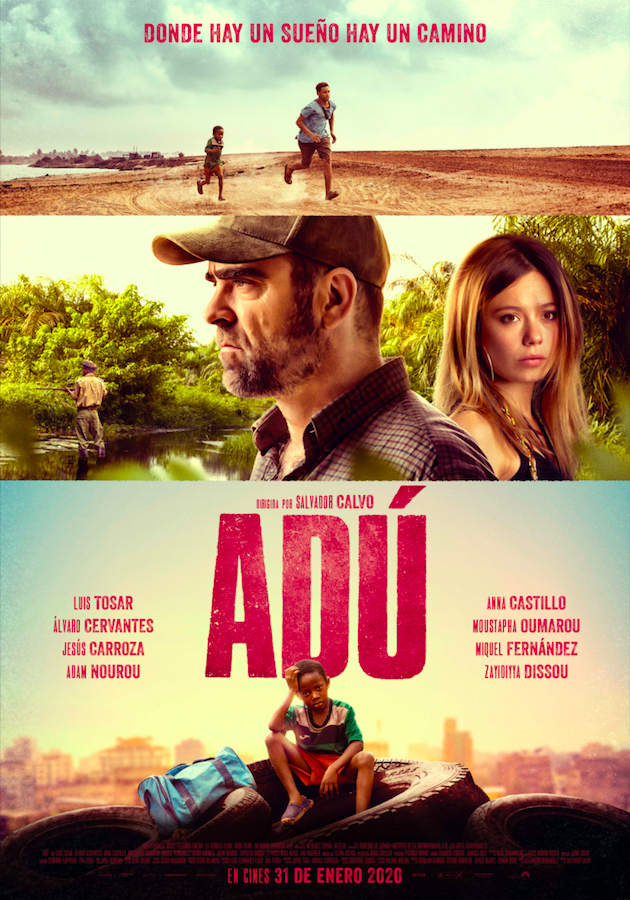 ADU. POSTER AND FIRST IMAGES OF THE FILM OF SALVADOR CALVO

“ADÚ” is the definitive title of the director’s new feature film, inspired by real stories about the immigration drama and told from three interwoven plots.

Starring Luis Tosar, Anna Castillo, Álvaro Cervantes and Jesús Carroza, the film is the debut of the children Moustapha Oumarou and Zayiddiya Disssou, chosen after a long casting process in the African continent.

Madrid, October 15, 2019. ADÚ, definitive title of the new feature film by Salvador Calvo (1898: THE LAST OF THE PHILIPPINES), will be released in cinemas on January 31, 2020 and today presents the poster and teaser trailer for this drama inspired in real stories about immigration told through three interwoven plots.

Starring Luis Tosar, Anna Castillo, Álvaro Cervantes and Jesús Carroza, the film is the debut of the young actors Moustapha Oumarou and Zayiddiya Disssou, chosen after months of casting in several countries of the African continent and who have become one of the great Filming discoveries.

Its protagonists will move in different natural settings of Africa, from the jungle and the desert to the border with Spain, and will show spectacular landscapes of the Republic of Benin, a country that has hosted for the first time in its history the filming of an international feature film, which has culminated in Spain (Madrid and Murcia).

For this production, Telecinco Cinema has returned to work with Ikiru Films and La Terraza Films, travel companions with experience in international filming, such as THE SARA NOTEBOOK, developed in Africa, and YUCATÁN, which covered three continents aboard a cruise.

ADÚ is a production of Ghislain Barrois and Álvaro Augustin (Telecinco Cinema), Edmon Roch (Ikiru Films), Javier Ugarte (La Terraza Films) and Un Mundo Prohibido AIE, with the collaboration of Mediaset España and Mediterráneo Mediaset España Group and the financing of ICAA You will arrive at the movie theaters at the hands of Paramount Pictures Spain.

In a desperate attempt to reach Europe and crouched before an airstrip in Cameroon, a six-year-old boy and his older sister wait to sneak into the holds of an airplane. Not too far away, an environmental activist contemplates the terrible image of an elephant, dead and fangless. Not only do you have to fight poaching, but you will also have to meet the problems of your newly arrived daughter from Spain. Thousands of kilometers to the north, in Melilla, a group of civil guards prepare to face the furious crowd of sub-Saharan people who have begun the assault on the fence. Three stories linked by a central theme, in which none of its protagonists know that their destinies are doomed to cross and that their lives will no longer be the same.