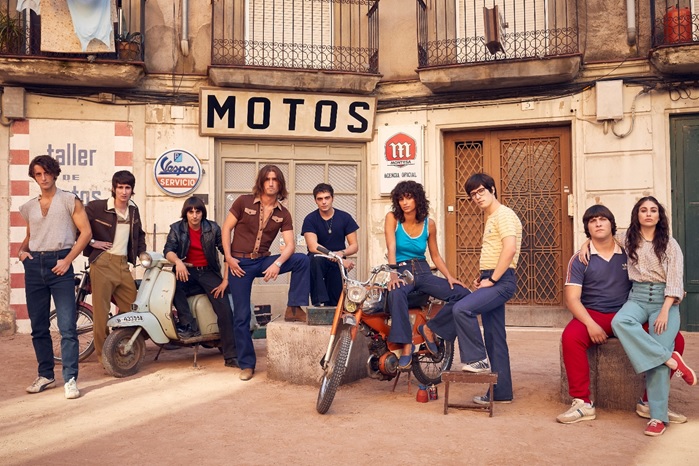 DANIEL MONZÓN FINISHES THE FILMING OF HIS NEW FILM: THE LAWS OF THE BORDER

Director Daniel Monzón (Yucatán, El Niño, Cell 211) has just finished filming his next film Las Leyes de la Frontera, an adaptation of the novel by the writer, columnist and winner of the 2019 Planeta Prize, Javier Cercas.
Filming has lasted 9 weeks in different locations in Catalonia, among which Girona, Manresa, Montblanc and Costa del Garraf stand out among others.

“After shooting” El Niño “and” Yucatán “with Daniel Monzón, we once again faced an ambitious challenge.” The Laws of the Border “is an extraordinary story that portrays Girona in 1978, with neighborhoods that paradoxically today They are almost no longer preserved, which has forced us to recreate it in different parts of the Catalan geography such as Manresa and Montblanc, moving more than a thousand extras and almost a hundred specialists for their chases and action scenes, with the challenge of intervening constantly in the different locations to return to that world so close and at the same time so distant as the Spain of the first democracy. “

“Seeing the dailies of Las Leyes de la Frontera every day has meant, during these nine weeks of filming, an absolute joy for its packaging, its verisimilitude, constant emotion and adrenaline. The putting into images of the fabulous novel by Javier Cercas could not have been in better hands. Daniel and the entire team have captured all its ingredients in an exceptional way and have made it fly to the big screen. Looking forward to seeing it in theaters soon. “

The script of the film is signed by the prestigious screenwriter Jorge Guerricaechevarría, along with Monzón, who repeat a tandem after working together on the successful ones: Cell 211, winner of eight Academy Awards, including the Goya Awards for: Best Film , Best Direction and Best Adapted Screenplay; the winner of four Academy Awards, El Niño; and the recent Yucatán.

In the words of Daniel Monzón “It was at the end of ‘El Niño’ that I read ‘The Laws of the Border’ and the mark that it left me has accompanied me all this time, almost seven years that have allowed me to give it different turns and approaches to the way to address its adaptation to the screen, and that has finally been specified in the version that we have just shot these days. The beautiful love triangle between Tere, Nacho and El Zarco in the hectic years of the transition, with all its load of adventure story, traditional thriller and romantic recreation of that quinqui universe from the distance of our days has transported me to a fascinating world . Now comes the time to finish the trip so that the viewer travels it with the same intensity with which we have lived it. “

The story begins in the summer of 1978. Nacho Cañas, an introverted and somewhat misfit student, is seventeen years old and lives in Gerona. When he meets Zarco and Tere, two young criminals from the city’s Chinatown, he finds himself immersed in a love triangle that leads him to live an unstoppable career of thefts, robberies and robberies that will last throughout the summer and that will change his life forever. The Laws of the Border is the story of the summer in which Nacho experienced his first love and grew up, constantly transgressing the border between two worlds, crossing the line between good and evil, between justice and injustice.

Marcos Ruiz, (Cousins, The Man with a Thousand Faces, Futbolísimos) plays Nacho; Begoña Vargas, (Malasaña 32, The other look, High Sea) gets into Tere’s skin; and Chechu Salgado (Fariña, Monteperdido, Patria) is Zarco.
The cast is completed by Carlos Oviedo as Guille, Xavier Martín as Gordo, Daniel Ibáñez as Legs, Jorge Aparicio as Chino, Víctor Manuel Pajares as Drácula and Cintia García as Lina, giving life to the Zarco band.

Warner Bros. Pictures Spain will be in charge of distributing the film in Spanish theaters in 2021.